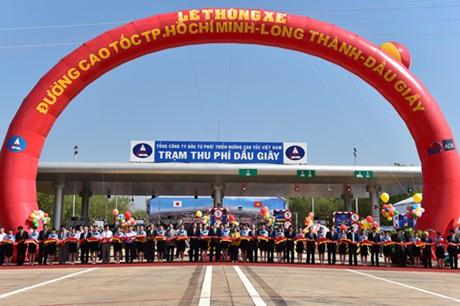 The 55 km expressway has the total investment capital of US$1 billion, jointly funded by Viet Nam, the Asian Development Bank and the Japan International Cooperation Agency.

The project was divided into two subprojects. The first 20-km section of the expressway, which links the Vietnamese southern hub with its neighboring Dong Nai province, was put into operation in August last year.

The second section links the city’s belt road 2 and Dau Giay in the neighboring province of Dong Nai was designed for vehicles to travel at 100 kph.

The entire expressway will help shorten travel time from Ho Chi Minh City to Dong Nai from the current three hours down to just one hour.

Addressing the event, PM Dung emphasized the significance of the project for national socio-economic development and defense.

He urged the Ministry of Transport to continue infrastructure development as it is one of the three strategic breakthroughs that Viet Nam is now focusing on. The Ministry was tasked to complete the expansion and upgrading of the National Highway No. 1 from Lang Son province to the southernmost province of Ca Mau right in 2015 while mobilizing resources for improving the country’s expressway network.

The Government chief took the occasion to extend sincere thanks to international organizations, foreign Governments and peoples, especially the Asian Development Bank and the Government and people of Japan for granting preferential capital for Viet Nam to develop infrastructure.

He hoped for continued support from foreign partners in the time to come and commited to effective use of domestic and foreign loans for infrastructure development./.